When I posted about my Cornish Knit-Frock, I promised I would tell you a bit more about fixing a mistake and a nifty way of counting rows. Today I will do just that, and also want to share with you what I will do differently when I knit the next one, because I just know I will.

When I had knitted about eight rounds of the patterns above the bars and seeds, I noticed that the chevrons in the middle, where actually not in the middle, I was one stitch off. I knew this was going to annoy me no end, so I decided to fix it. I could frog back eight rows, but I first wanted to try something else: I decided to drop down the offending area only, and knit it back up. If that failed I could always still frog back.

Here’s a picture of said offending area, one stitch out of kilter: 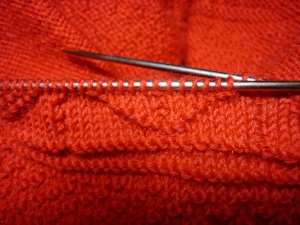 I carefully dropped back the stitches between the two garter stitch columns on either side of the upside down chevron (with apologies for the poor picture quality):

Then I used a pair of double-pointed needles one size smaller, to knit it all back up. This gets a little bit fiddly when you reach the end of the “row”, but that is why it is easier to use somewhat smaller needles. Also make sure you don’t mix up the strands that get tangled into egg noodles: 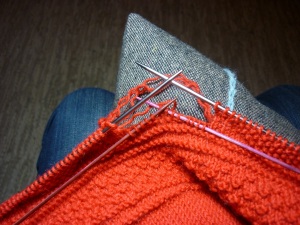 It didn’t take me too long before I had everything back in the middle. Definitely an easier fix than frogging eight rows!

COUNTING ROWS WHEN YOU’RE NEARLY THERE

One of the things that I really don’t want to do when I’m doing some mindless knitting, is having to put down the knitting and measure, yet again, whether I’m nearly there for the ribbing to start. No, another 1/4 inch to go. So I had a brain wave after ingesting the eastern style knitting chapter in Mary Thomas’s Knitting Book (which, incidentally, has the best glove pattern ever) and a remark by Elizabeth Zimmermann about trying to keep progress when doing endless rounds of stocking stitch (possibly related to her pi shawl?). Once you are getting close to that point where you have to measure whether you have reached the right length, stop knitting a bit before you reach the end of the round. Now measure the length of your fabric and work out how much you have left to do.

Say, you are knitting a sleeve in the round and are 1 inch away from starting the ribbing. Now your row gauge is for example 10 rows (rounds) per inch. Here comes the trick: pick up your knitting and when you have ten stitches left to finish the round, knit that tenth stitch eastern style. In other words, wrap the yarn around the needle in the opposite direction you normally do (normally you would wrap clockwise, so eastern style you wrap anti-clockwise). This sets the new stitch up with the right leg at the back of the needle instead of the front. Continue knitting as normal. You will hit upon that weird tenth stitch and notice that you will need to knit it through the back loop to put it right again (if you didn’t knit this stitch through the back loop, it would show up as a twisted stitch). The next stitch, nine away to reach the end of the next round, gets knitted eastern style. Again, continue knitting as normal, and at near completion of the round, you will have to knit the ninth stitch through the back loop. Keep going like this and it won’t be long before the last stitch to be wrapped eastern style is also the very last stitch of the round. Voila, you are ready for your ribbing! I found this also works with purl stitches.

When I will knit my next Cornish Knit-Frock, and I will, there are a few things I will do differently:

What are your top tips and tricks for knitting ganseys?

8 Replies to “What I learnt knitting my Cornish Knit-Frock”

Epic #visiblemending commission completed! A fine cashmere shawl repaired with @appletons_wool, using mostly darning and eyelet techniques. I enjoyed reconstructing the edging.
@jennyeclair1960 explores how crafters make their voices heard in this brilliant BBC documentary. Available to watch in the UK through the BBC iPlayer. Simply search for “craftivism”.
My tidy cup got smashed into pieces the other day, so I fixed it with some @sugru. I use this cup to tidy away loose threads and other waste while I work on a project, so I don’t create even more mess while working.
#visiblemending of a beautiful cashmere shawl, picking up the warm gold colour of the stripes.
I made a room screen to hide my little home office space when it’s not in use. Love the whimsical @cole_and_son_wallpapers I used for it, as it really brighten up this corner of the living room!
A satisfying pile of parcelled up jumpers for a customer. Some of the sweaters were repaired by me before, so I used a different colour second time round.