I own a pair of shoes that were in dire need of a Visible Mend. They were once very smart, yet comfortable to wear, and clearly made by highly skilled shoe makers. But now they are more than love-worn, as I haven’t always taken care of them as well as I could and I neglected using a shoe horn: 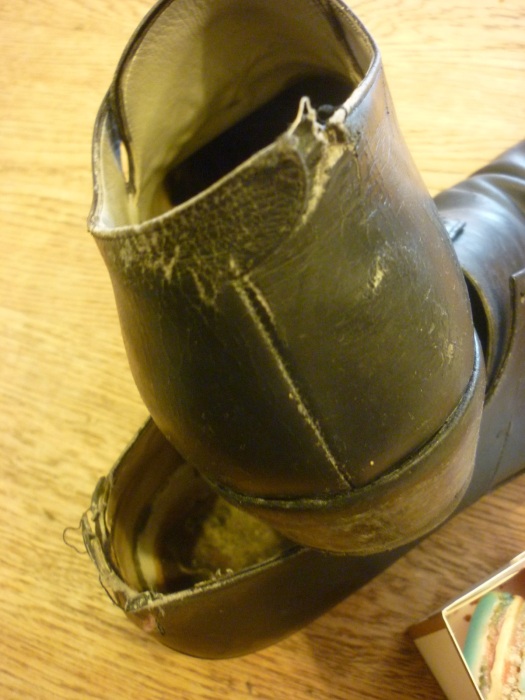 I remember very well the day I bought them. It was in the autumn of 1999 and I was visiting London with a friend. I would normally not have enough money to justify buying something by Vivienne Westwood, but I knew the sales were on and so I dragged my friend to her shop on Conduit Street. I fell in love with these shoes straight-away, but when I tried them on, I could not get my feet in. With a sad face I put them back on the shelf and looked at other things. However, nothing really appealed to me and I was drawn back to the shoes. I tried them on again. And I could not get my feet into them. So with a sad face I put them back on the shelf, again. After another trawl through all the racks and shelves, clearly nothing would do but those shoes. So I tried them on one last time. The helpful shop assistant started chatting to us and said that after nothing much had happened in the shop, I was her “amusement of the day.” And as if by magic, at that moment my feet just slipped in. I laced up, paid up and walked away with the most gorgeous shoes.

But twelve years later, I realised that if I wanted to continue wearing these shoes for another few years, something had to be done. So I bought a box of macarons, and paid a visit to my friend Alex, who runs Laste Shoehop in Brighton: 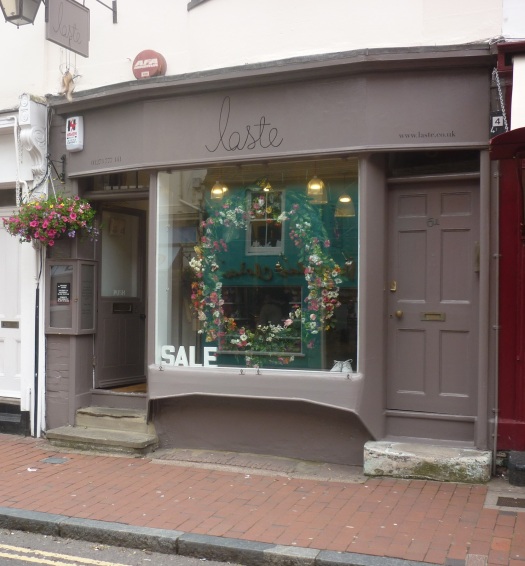 As you can see, not only were the heels run down, the insoles were also in need of replacement. Note that the box of macarons was still full at this point:

We decided to make a new heel piece, which would line the inside of the heel and a flap that would fold over to cover up the ugly mess. To put this into place and keep the shoes comfortable, we also had to take out the insoles. Or socks, as they are called by shoe makers! They clearly needed replacement, too. There was some shoe maker evidence about the size of the shoes hiding under the sock of the right shoe, if you look closely:

First, we made a pattern out of paper, which had a curved seam in the middle to create the heel shaping. The macarons were proving to be very tasty indeed: 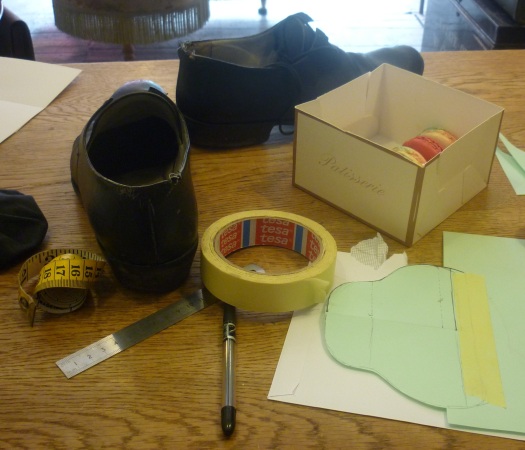 I also traced the socks, so I could use that as a pattern for the new ones. Once we were happy with the pattern pieces, I cut them out from card. In the shoe maker trade, seams are indicated on the pattern by a few cut-outs, instead of cutting the wedge out completely. This makes the pattern more sturdy, as they are usually re-used a lot. One cut-out has a squiggly side, so you can tell left and right side apart. In this picture you can also see the so-called click knife. In shoe making, cutting the leather pieces from the pattern is called clicking – and using scissors is frowned upon at all times! 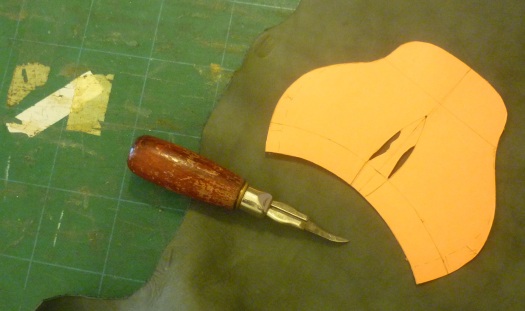 Alex explained how leather stretches in only one direction (across the belly), and when you click the pattern pieces, this is taken into account, so you can give the shoes stretch where they need it, for example across the foot. Once I had clicked the pattern pieces, it was time to sew the seams. Leather is a wonderful material, as you can use a very small seam allowance, without it ripping it. Alex has an old but sturdy domestic sewing machine for this: 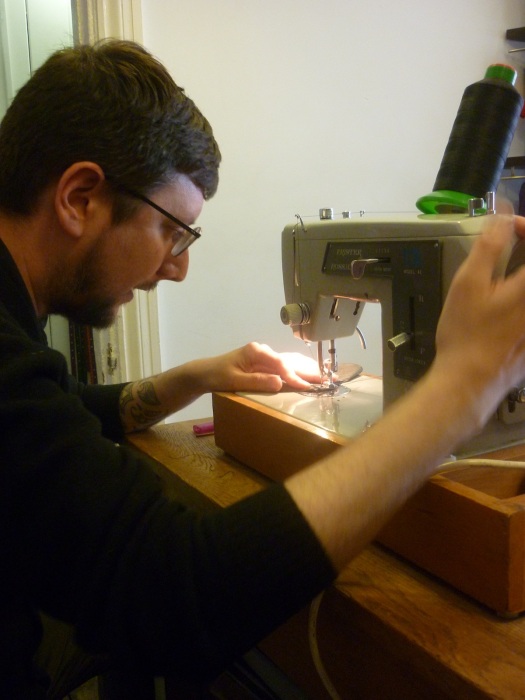 Here are the heel pieces just after sewing up. They somehow remind me of moths in this picture:

In order to keep the seams open, and to make sure they don’t give you blisters by rubbing against your heels, they are flattened out with a hammer. This shoe makers hammer has a special head, one side of which is made from raw hide, which won’t damage the leather when you give it a good bash:

On the inside the heel pieces will fold under the sock, so here is Alex using the naughty scissors, cutting out small wedges to make shaping easier and avoid buckled up leather under your foot. Tut tut tut Alex, scissors!

Next stage is to put contact glue on all surfaces to be glued together. The smell of it made me feel a bit giddy:

Once the glue had dried, it was time to stick the pieces in place. This was a bit tricky to do, as the two glued surfaces should not get in contact with each other where you don’t want to: 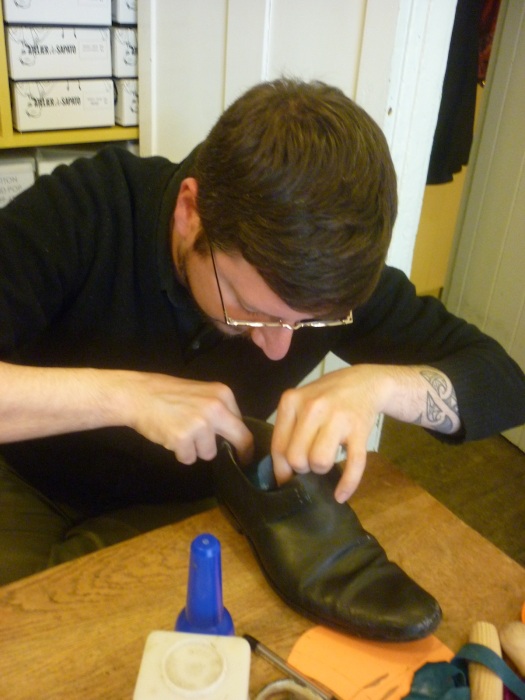 When the pieces were in place, I had to let the glue dry properly, so the finishing touch: a nice contrasting seam in bright yellow strong top stitch thread, had to be done at home. It would be difficult to sew through layers of leather with a leather needle and at the same time making sure the stitch lines would be neat and tidy, so I used a little trick. I borrowed Alex’s awl, which is also known as a bradawl (pronounced as |ˈbradɔːl|), to pierce holes through the leather. To keep the holes equidistant, I marked them on the leather with a pair of contractors:

One heel done, one left to go! If you look carefully, you will see I also made a small piece on the right shoe where another seam ripped. I’m a bit obsessed with using yellow as a contrast colour:

I made new socks from this lovely thin blue leather: 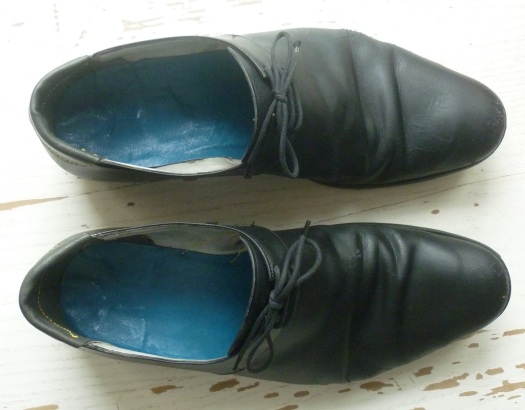 I thoroughly enjoyed visibly mending my very favourite pair of shoes. I learnt a lot from Alex about making shoes, and I got to use some great tools: 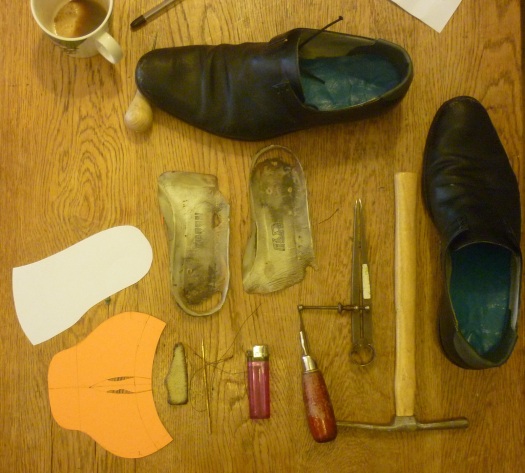 Clockwise from top left: cup of coffee, bradawl hiding under shoe, left shoe, right shoe, upholstery hammer (there was one pesky nail poking through), contractors, click knive, lighter to burn ends of nylon sewing thread, ballpoint refill with silver ink (this rubs off easily), a rubber made from a piece of crepe sole in the shape of a shoe, heel piece pattern, sock pattern, right sock, left sock.

Although using special tools was nice and made certain things go a bit easier, I truly believe it is possible to do this repair at home with tools you have just lying around; you just need some courage and patience. Thank you Alex, for a wonderful day!

#visiblemending of @fashademic’s super cute hand-knitted Wensleydale wool cardigan (with the cutest label, shown in last pic.)
#visiblemending of @fashademic’s vintage crepe dress. I’ve sewn on a small silk print medallion patch. To get perfectly rounded edges, I made a card template to match. Then I used a small running stitch and gathered the edge of the silk patch around the card. After sewing it in, it was easily retrieved through the hole behind the patch.
*** UPDATE ***
A few weeks ago I made the Maker’s Top, a pattern by @themakersatelier. Can’t wait for warmer weather.
@Regrann from @manfantastic - Darning, for the uninitiated, is the process of repairing holes or areas of extreme wear in garments. While some restorations are best left unseen, @tomofholland, the man responsible for these newly patched-up socks, likes to emphasise the art and artisanship of a good repair job. Note the beautiful spore-like spread of a well-executed darn. Photography by @kuba_ryniewicz. #FM33 #REUSEREPAIR #HOLES
I’m working on something really exciting! Right now, I can only share some glimpses. Darning crosses over to embroidery on this garment.