Or to be more precise, I visited Gateshead, as I was invited by The Shipley Art Gallery in Gateshead, which is just on the other side of the river Tyne from Newcastle. The Shipley has a new exhibition on, called ‘Collected Threads,’ celebrating 35 years of the Shipley Craft Collection. One of the events around this exhibition was the Shipley Late last Friday, where a number of artists and makers were asked to lead drop-in workshops. Amongst others, one could learn to make Suffock puffs, make jewellery out of bicycle inner tubes and felt collars. And, of course, how to darn!

The Shipley Art Gallery opened in 1917, bequested by Joseph Shipley, who was a local sollicitor. He had a large collection of paintings. Here’s one of them:

Unfortunately I did not manage to note any particulars of this painting, so I don’t know who painted it, or who’s portrait it is. Although I don’t think it’s a Vermeer, it does have a certain Dutch feel to it. If anybody knows, I’d love to hear from you!

In 1977, 35 years ago exactly, The Shipley started to collect contemporary craft made in Britain. It contains about 400 objects and some of the highlights are currently on display as part of the new exhibition. I particularly liked this tapestry by Sandra Milroy, titled Bleached Wall Under Thatch (1980-1982): 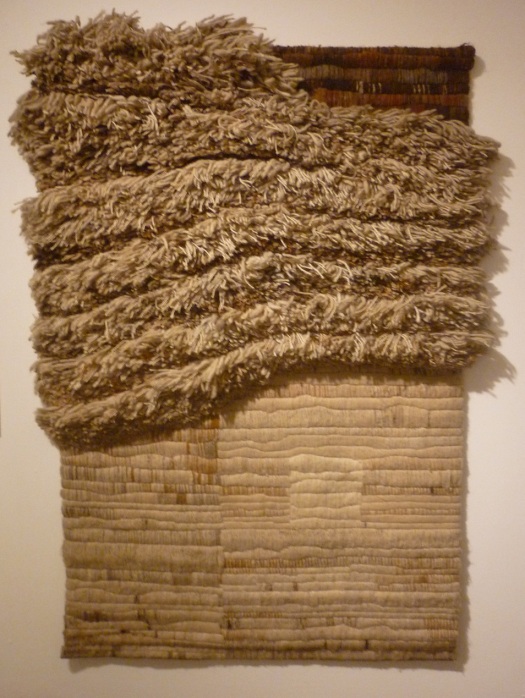 I love the contrasting textures and irregularities and the colours she used. It has a very warm feel about it through the use of wool and hessian. Another example of texture and wool, but this time entirely practical, where these three beautiful ganseys: 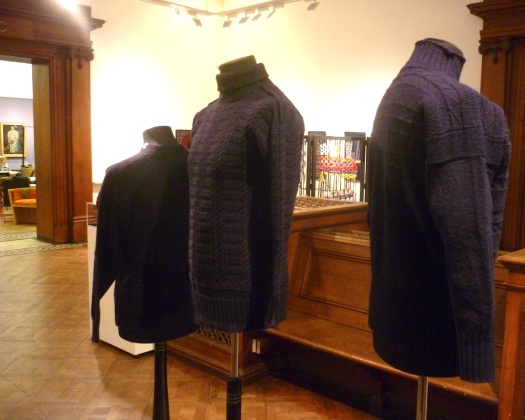 My hands are itching to knit one! But that was not what I was at The Shipley for. I set up my little stall with darned socks, a large and motley collection of threads and yarns and an abundance of swatches and needles:

Hiding under the table you can see the wheels of my trolley that helped me transport all these treasures to the gallery. The doors opened at 6pm and it didn’t take long before it was buzzing with people, drink in hand, walking around and soaking up the creative atmosphere. Here you can see yours truly, discussing yarns: 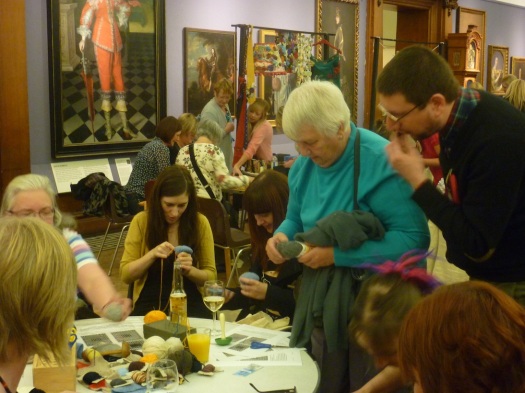 There was a wide range of darning skills to be found in Gateshead. Some people told me they darned all the time, whereas others had never darned in their lives. I was shocked, however, that one girl told me she THREW OUT HER HANDKNITTED SOCKS when they developed holes as she didn’t know how to mend them! I’m pleased to report that after last Friday, this shall not happen again, ever.

Many people knew that I would be teaching darning, and they brought with them cherished items in need of some Tender Love & Care. This ranged from a wild Italian knit from the 80s (colourful flowers on a ground of black and white checks, it looked much better than I could ever describe it – if only I had taken a picture), to these lovely Scandinavian hand-knitted gloves:

The left glove, confusingly displayed on the right, had been darned previously in a cream coloured yarn. The lady who brought them told me that she didn’t know who had knitted these gloves, as her husband has had them for years, and they are his absolute favourite gloves. I was not surprised to hear this, as they were nicely knitted, and had a classic Nordic Rose (or star) on the back. The right glove, as displayed on the left, had some big holes in the index finger and thumb, and the lady who brought them in was enthralled by my glove darner. She told me it made darning so much easier!

I also learnt some darning techniques from the visitors. One lady in particular showed me some invisible mending principles, which she had learnt from her grandmother. I wish I could have met her grandmother, and learn all the tricks!

With around 200 visitors the Shipley Late was a very successful and fun evening, and learning as well as teaching made it an even more worthwhile event. If you’re in the neighbourhood, I can heartily recommend a visit to The Shipley and who knows, you might bump into some darning!

I made plates! At this rate we will never ever have to buy any crockery ever again… I absolutely love decorating with cobalt oxide, perhaps one of my forebears came from Delft, you never know.
Lunchtime practice of making marks. I made some plates that I want to decorate once they’ve been bisque fired.
Adventures in clay continued; so many ideas to explore: a little thrown bottle and beaker, then carved. A bowl painted with cobalt oxide: exploring my Dutch heritage. Loads to learn about delftware painting!
Latest pot adventures! As I’m still very much at the very start of my potters journey, I’m trying out all sorts of things to see what I like. Or not. Here is a variety of shapes and glazing trials. Some more successful than others. Ideas to explore further and others to discard.
My pottery wheel throwing course with amazing teacher Amy @dulse.ceramics at Studio @pottery.gagliano has come to an end. Luckily they have open studio days so I can continue throwing!
My first attempts finally glazed. Really enjoying my wheel throwing workshop at @pottery.gagliano with excellent teacher @dulse.ceramics