Due to my Dutch heritage I’m an avid coffee drinker, but living with an Irish man has shown me the joy of tea. Recently we switched from tea bags to loose tea leaves and we moved on from brewing in a cup to brewing in a new, shiny Brown Betty:

The latest addition to our ever-expanding collection of crockery

But it looks like there’s something missing in this knitter’s household. One, where are the biscuits? And two, what about a Tea Cosy? 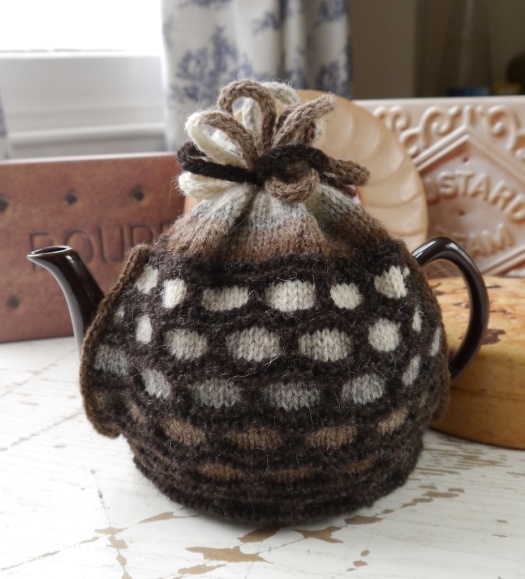 Tea pot with the obligatory tea cosy and biscuit tins

The stitch pattern is a classic honeycomb stitch, which, despite appearances, is a very easy slip stitch pattern. In other words, you only knit one colour at a time. However, I did use a genius technique to avoid the jog in the stripes on crown of the cozy. TECHknitter explains all on her blog – I used her so-called travelling jogless stripes variation. Can you see where I changed colour?

Invisible change of colour on the crown of the cozy.

When I had finished the cosy, it looked a bit bare. In my mind a tea cosy needs a whimsical flourish on top. Enter i-cord. I made a long cord using all available colours, and added it to the crown of the cosy.

I-cord crown in all its glory

I knitted this tea cosy using left-overs from a number of Fair Isle swatches, using Foula wool. Magnus and Justyna from Foula Wool have asked me to write a knitting pattern for a men’s cardigan, so I’ve been swatching like crazy. Those of you who follow me on Twitter and Instragram will have seen some swatches already.

Knitting the swatches and the tea cozy has allowed me to get to know the yarn. It has a great handle and is full of character. And of course, I love the seven natural colours it comes in. As it’s a DK weight, it knits up quickly. As somebody asked me this on twitter: the swatches are knitted in the round, with additional steek stitches. These are knitted with both colours together. I only casted off the fabric, not the steek stitches, as these were all dropped down all the way. Then I cut all the loose strands and knotted them in pairs using a reef knot. For swatch two I made a calculation error, so I ended up with only three steek stitches, so I used a crochet reinforcement instead.

I have now selected the stitch patterns I want to use. If you want to know how the cardigan will turn out, you will have to be patient, as I will reveal the cardigan and knitting pattern during Wovember 2013. But don’t be surprised if I post some teaser pictures in the meantime.

The Tea Cosy is Ravelled here.

13 Replies to “Tea Cosies and Cardigans”