Yesterday I launched my new pattern: Tom of da Peathill; a fitted men’s cardigan in three sizes, inspired by the natural shades of Foula Wool it was designed for. As I mentioned in yesterday’s blog post, Foula Wool is a sturdy DK weight yarn, so I used the knotted steek method to avoid any bulky edges resulting from folding over, or the very elegant steek sandwich devised by Kate Davies, which usually gives a very handsome finish.

The following tutorial shows you how to create a knotted steek. You may want to use your gauge swatch to practise your knotted steek on so you become familiar with this technique.

knitting and casting off the steek stitches 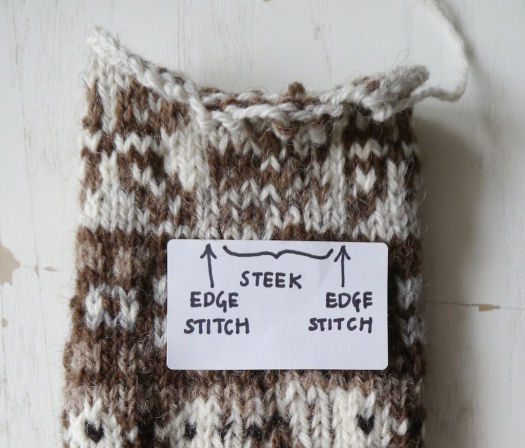 unravelling the steek stitches and cutting

Now comes the fun part. The steek stitches are all dropped down to the cast-on edge, thus creating a whopping large ladder! As the Foula Wool is a bit sticky – the very reason it’s a good yarn for stranded colourwork – you might need to coax them a bit to unravel all the way down. You are now ready for the scary part: the strands forming the ladder are cut in half. Spread the cardigan out a bit so you can easily find the middle of each strand. Remember, knitted fabric doesn’t like unravelling sideways, so it will all be okay.

The name of this technique – knotted steek – will now become apparent. All the threads are knotted in pairs in an overhand knot. Make sure that you always use the two threads from one row of knitting. Also ensure you snuggle up the knot to the very edge of the fabric for a tidy finish.

The strands are knotted into pairs using the overhand knot, shown above 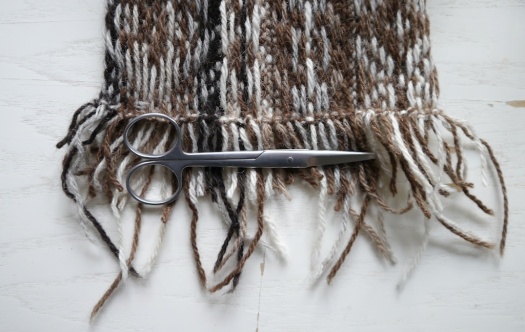 The knotted steek shown on the wrong side. Notice the tidy row of knots, all snuggled up to the edge of the fabric

It’s now time to pick up your stitches. You pick up between the edge stitch and the first pattern stitch. Keep an eye out for the fringe, and try not to trap them with the yarn you are using for picking up. Now commence knitting the buttonbands or sleeves.

This is the part that will take a bit of time. Perhaps because I love darning so much, I really enjoy it. Be prepared to set aside an afternoon, and make a cup of tea before beginning. You will soon find yourself getting into the rhythm and becoming absorbed by the task at hand. You will need a sharp wool needle with a large eye. Sometimes called yarn darners, they are basically a chunky version of a crewel needle. The ends are darned in on the wrong side by skimming the floats at the back. If you find the strands a bit on the short side, then employ a classic sewer’s hand-finishing technique: first darn in the needle, and only then thread the needle; I use the method explained in this blog post by Stitchers Needle. By threading the needle with the two yarn ends from one knot it will go quicker than you think. Once the fringe has been darned in, trim the loose ends close to the surface.

darning in the ends. On the right the unfinished fringe. Then the needle skimmed into a float, ready to be threaded. In the middle darned in ends. At the left the loose ends have been trimmed close to the surface

the finished knotted steek on the buttonband. Notice that the edge stitch has turned to the inside, and the neat row of knots

There you have it, a steek which is virtually without any bulk, and which doesn’t impact the stretch of knitted fabric. Over time, this finish will become neigh on invisible.

I hope this tutorial has been clear and instructive, and has demystified my favourite steek technique.

Some close-ups of my collaboration with @toast. They asked me to work my #visiblemending magic on a small collection of damaged shirts, on show at and available to buy from @toast_shoreditch until 26 September.
A week ago I finished my hand-stitched shirt. Really happy with the end result! Contrasting thread show my maker’s hand. Finished with hand-stitched buttonholes and vintage mother-of-pearl buttons. The hem neatly finished in the corners with a little extension to reduce bulk. And the sand-washed silk is a dream to wear.
I have a week off, so I’m making myself a silk shirt. Over the last couple of years I’ve really worked on my hand-stitching, so I’m ready to show it off by using contrasting thread. Even though I try to make each stitch the same, they are all made by hand and as such small irregularities are not just unavoidable, but positively welcomed. They show my maker’s hand.
Who wants to have a look in my trousers? So chuffed with this make. Hand-stitched throughout, and adapted from a pattern I drafted together with @fashion_atelier_gorbeck.
After a couple of months of working on a large commission, I’m back to hand-stitching a pair of trousers. I’ve used old shirts for making the pocket bags and waistband lining.
I love the diagrams in old needlework books, showing how to insert patches. Different techniques are used for different applications and fabrics.