Around Wovember 2012 ago I was introduced to spinning by my comrade in wool Felicity ‘Felix’ Ford. I started off with a drop spindle, and soon got caught by the spinning bug. It was not long before I started dreaming about spinning wheels. As is my nature, I started reading up on them, and I soon realised that if I wanted a decent wheel I could afford, I would be best off getting a second-hand wheel from a good make.

And when it comes to good wheels, it would be hard to beat a Timbertops. This make just kept popping up in on-line forums, and I decided I would hold out until I would find one for sale. Timbertops Wheels were originally made to order by husband-and-wife team James and Anne Williamson to exacting standards. Last summer my patience was rewarded. The East Sussex Guild of Spinners, Weavers & Dyers had an original Timbertops Chair Wheel for sale. This model of spinning wheel was supposedly originally made by using the frame of an old chair, and appears to be more common in the USA than in the UK. As you can imagine, the footprint of this wheel is rather small, which was perfect for my one-bedroom flat.

So it was with much excitement I went on a road trip with my friend Sue to collect the wheel in The Garden of England (as the county of Kent is known in the UK.) Kent didn’t disappoint, and we kept finding ourselves travelling down smaller and smaller roads, in increasingly beautiful and bucolic surroundings. Eileen, the seller of the wheel, had given us very good directions, but just in case we miss it, she put up a sign for us at the last turn.

Over a cup of tea, Eileen told us the history of the wheel. She purchased the wheel from Jim Williamson at Timbertops about 25 years ago when she and her husband moved to the country and purchased a few sheep to keep the grass in the paddock down.  It was one of the first chair wheels that he made and he fitted a maiden on the right hand side so that left or right handed people could use it by swapping the flyer assembly over.  The wheel was in good condition but Eileen hadn’t used it for about 10 years,  as she has developed arthritis nearly everywhere. Consequently her hands and back play up very badly if she tried to sit and spin. Although Eileen can no longer spin, her hands are not idle, and she showed us some beautiful knitting and quilting pieces she was working on. 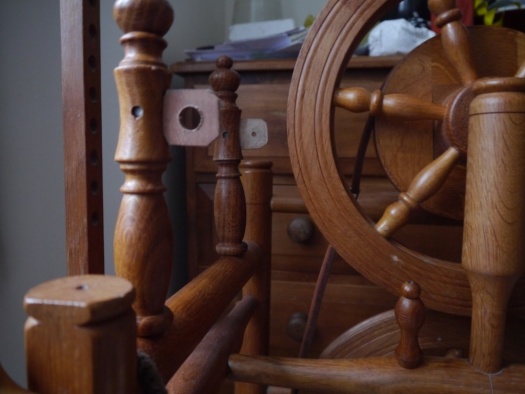 A close-up of the left-side mother-of-all, you can also see the leather drive-band of the accelerator. The little handle sticking out just in front of the wheel is in fact the handle of the orifice hook placed in its own little home

The chair wheel is a spinning wheel with a double-treadle, and it has not one, but two fly wheels placed one above the other. the treadles drive the lower wheel, which in turn accelerates the upper wheel by means of a leather drive-band. The upper wheel in turn drives both the flyer and bobbin, as it also has a double-drive. In addition, it has two mother-of-alls, one on the left and one on the right. This means you can have the flyer assembly on either side of the wheel, and as I’m left-handed I prefer it on the right-hand side. This wheel doesn’t do things in halves!

The wheel has been turned from oak, and the attention to detail is superb. Everything is in proportion, and I particularly like that the orifice hook has its own little home next to the upright of the upper wheel. I was very lucky to also get a skein ‘unwinder’ (for want of a better word), a lazy kate, and twelve bobbins, all made by Jim Williamson.

The right mother-of-all, with the flyer assembly.

As the wheel was missing one maiden (one of a pair of small upright ‘sticks’ with leather bearings that holds the flyer-and-bobbin assembly), I contacted Joan Jones from Woodland Turnery. Joan and her husband Clive took over the Timbertops business when Jim and Ann Williamson wanted to retire, and I think they are doing a great job of it, too. You can read more about Woodland Turnery on the Wovember blog here.

Not only did I get the wheel, but also a skein ‘unwinder’ and a lazy kate. And twelve bobbins

The chair wheel with its accelerator mechanism is ideal for production spinning, but the flipside is that it’s not really a beginners wheel. Luckily there’s a large whorl as well as the standard one, which means I can slow the wheel right down. I’m taking my time learning to spin on this wheel; every time I sit down with it, I not only appreciate it as a spinning tool, but also the workmanship required to make it, the beautiful oak it was made from, and all the spinning that has gone on before I had it.

When I emailed Eileen to thank her for the wheel, she replied saying that “…I did have many happy hours spinning and I [was] most anxious for the wheel to find a good home with someone who would appreciate it.” Knowing how much this wheel meant to Eileen, I hope I will do her proud, and I’m looking forward to spending many happy hours with it.

18 Replies to “My Timbertops Spinning Wheel”

Black silk on cashmere for subtle #visiblemending. This is something I’ve wanted to try out for a while. I finally struck lucky with this repair for @fashademic.
#visiblemending of @fashademic’s super cute hand-knitted Wensleydale wool cardigan (with the cutest label, shown in last pic.)
#visiblemending of @fashademic’s vintage crepe dress. I’ve sewn on a small silk print medallion patch. To get perfectly rounded edges, I made a card template to match. Then I used a small running stitch and gathered the edge of the silk patch around the card. After sewing it in, it was easily retrieved through the hole behind the patch.
*** UPDATE ***
A few weeks ago I made the Maker’s Top, a pattern by @themakersatelier. Can’t wait for warmer weather.
@Regrann from @manfantastic - Darning, for the uninitiated, is the process of repairing holes or areas of extreme wear in garments. While some restorations are best left unseen, @tomofholland, the man responsible for these newly patched-up socks, likes to emphasise the art and artisanship of a good repair job. Note the beautiful spore-like spread of a well-executed darn. Photography by @kuba_ryniewicz. #FM33 #REUSEREPAIR #HOLES