Have you ever wondered about cast-offs that matches your cast-on? Well, my Curiosity Cabinet of Knitting Stitches contains not one, not two, but three such matches. The Curiosity Cabinet opens to the public on 15 February at Prick Your Finger, so come along for a wee drink from 6 to 9pm.

Matching your cast-off technique to look like your cast-on won’t take you any extra effort, yet it is one of those details that really gives a finishing touch to your knitted item. One of my favourites in these matching looks is the tubular cast-on and tubular cast-off for 1X1 ribbing: 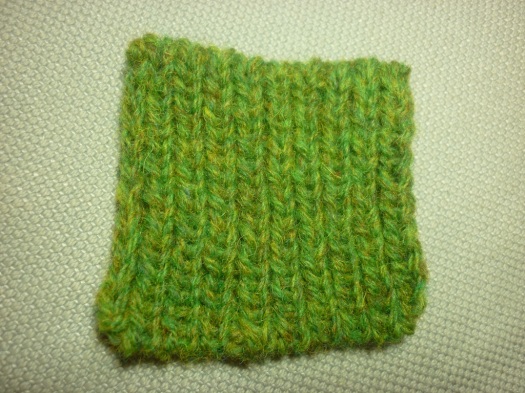 I just love how the stitches just roll over the edge to the other side, and as this cast-on is tubular, you have also knitted a neat little channel in which to hide your yarn tails. A winner all round. Indeed, these are the techniques I used for Susan Crawford’s Kasha cardigan, to match the ribbed edges throughout the garment.

As you probably know, the most common used cast-off is the chain cast-off: knit 1, [knit 1, pass second stitch on right needle over the first stitch and off the needle], repeat to end. This is a nice, firm cast-off that gets used very often, and wouldn’t it be great if you could have a matching cast-on? Well, you can. May I present to you the crochet cast-on!

This would be a good match for a scarf, for instance, as they give a firm edge and thus prevent the ends flaring out. If you would like to see these curious stitches in person, then come along on 15 February to the private view at Prick Your Finger, or pop in over the following few weeks.

Or, if you want to add these little gems to your knitting repertoire, then you can join my Curious Stitches workshop on 16 February 1-3pm; sign up here! I will teach you all six techniques shown in the green swatches above. This class is aimed at intermediate knitters.

Some close-ups of my collaboration with @toast. They asked me to work my #visiblemending magic on a small collection of damaged shirts, on show at and available to buy from @toast_shoreditch until 26 September.
A week ago I finished my hand-stitched shirt. Really happy with the end result! Contrasting thread show my maker’s hand. Finished with hand-stitched buttonholes and vintage mother-of-pearl buttons. The hem neatly finished in the corners with a little extension to reduce bulk. And the sand-washed silk is a dream to wear.
I have a week off, so I’m making myself a silk shirt. Over the last couple of years I’ve really worked on my hand-stitching, so I’m ready to show it off by using contrasting thread. Even though I try to make each stitch the same, they are all made by hand and as such small irregularities are not just unavoidable, but positively welcomed. They show my maker’s hand.
Who wants to have a look in my trousers? So chuffed with this make. Hand-stitched throughout, and adapted from a pattern I drafted together with @fashion_atelier_gorbeck.
After a couple of months of working on a large commission, I’m back to hand-stitching a pair of trousers. I’ve used old shirts for making the pocket bags and waistband lining.
I love the diagrams in old needlework books, showing how to insert patches. Different techniques are used for different applications and fabrics.