Some repair commissions are so much more than mending a hole or two. I recently completed a very special commission, which I would like to share with you. Bernadette sent me an email with a repair commission request, and as she has put her conundrum in such concise and clear words, I will quote the relevant parts here:

I have a pullover that my mother knitted me in the 1980s.  It was  cream coloured natural wool — I’ve since dyed it grey.  It’s a typically big and baggy eighties style from a pattern by Edina Ronay. It didn’t really suit me, the undyed colour was a kind of dirty cream and the neckline is wrong.

There’s a lot of my mother’s work in this garment.  I don’t want to get rid of it – it’s about 25 years old and it’s been at the back of a cupboard for a long time.  So I had an idea to make it wearable by dyeing it grey.  This wasn’t wholly successful. The colour is a bit patchy but on the whole I prefer it to the cream.  It still looked massive on me.  I had another idea to turn it into a cushion – it’s got nice (I think Guernsey) textured patterns all over it and the body would be big enough to make a substantial cushion cover.  So I cut off one of the sleeves, with a view to hacking the thing to bits to make a cushion.  As soon as I’d cut off the sleeve I regretted it.

There’s  a small hole in one sleeve too.  The pullover means a lot to me, especially since my mother died a couple of years ago.  We didn’t have much in common and knitting is one of my only true connections to her. 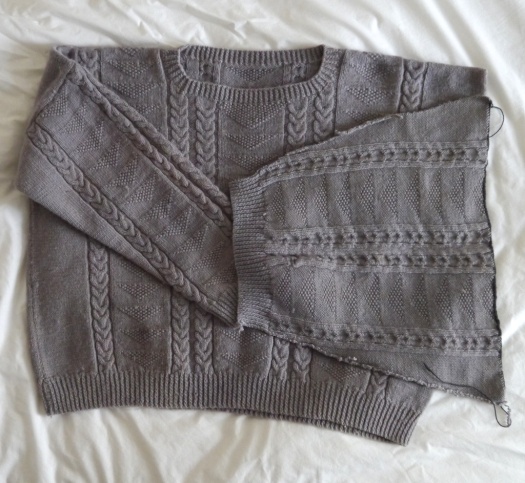 Bernadette’s jumper, you can see the cut off sleeve with ragged seams. In this picture I already unpicked the top of the sleeve and picked up the stitches

We exchanged a few emails so I could get a feel of what she wanted and come up with a repair strategy before meeting up.

Thank you for your kind reply.  I’m so glad you understand about the jumper – and about mothers!  I’m sure my own mother would think I was completely mad to be trying to fix up this old jumper she made.
As you can see – not only did I cut off a sleeve, I also cut open the seam of the sleeve.  Why  – I couldn’t really say at this point.  The wool is a bit felted through age, so nothing has come unravelled at all.
Re the neckline – it used to be a lot wider. I think maybe the jumper has shrunk a little bit because the neckline doesn’t seem so wide as I remember it. I guess it’s okay how it is.

I had to come up with a way of reconstructing the sleeve without losing too much of the original knitting. As the sleeve had been cut off and open, rather than carefully unpicked at the seams, I had some unravelling to do and fill in the missing inch at the very top of the sleeve cap. I also needed to do something about the side seams, as these could not be sewn together as they were. 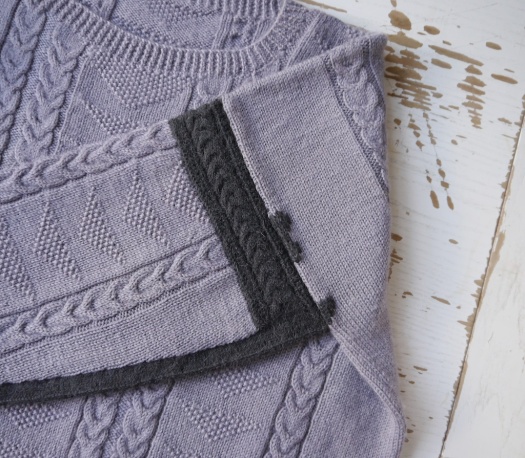 A sympathetic contrasting colour was used to fix the sleeve and make up for lost fabric
Looking for a colour that would provide some contrast, yet harmonise well with the lavender grey of the jumper, I settled on a dark grey alpaca sock yarn. I chose a cable stitch that resembled the stitch in the jumper, but wasn’t quite the same to reinforce the idea that this repair was not done by the person who originally knitted the garment.
Picking up stitches from somebody else’s work felt really intimate, and throughout the repair my thoughts went out to Bernadette, and her mother. I admired the skill and effort that went into making this jumper, the even stitches. I have never met Bernadette’s mother, but picking up her work forged a connection, and I imagined how she worked on this jumper. I will never know what might have gone through her mind, yet I was wondering about this; wondering what she would’ve thought about her daughter asking to do this Visible Mend. 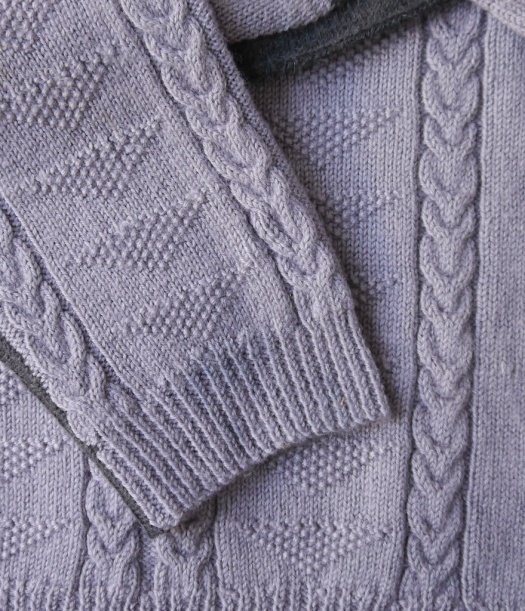 One invisible mend is hiding on the sleeve – can you see it?
As I had some original yarn from unravelling the untidy cut edges, I did an invisible mend on the hole in the sleeve. I felt that another, seemingly randomly placed visible mend would distract from the visible sleeve reconstruction. Once I had sewn up the jumper, I ‘de-pilled’ it, and then gently hand-washed it before blocking it. I had asked Bernadette not to wash the jumper before giving it to me for repair, as this might inadvertently do more damage: stitches might unravel, or more felting might occur. As always, once I feel I’ve completed the repair, the final touch was stitching the Visible Mending Programme initials into the garment.

VMP – Visible Mending Programme
I guess you might want to know what the jumper looks like now? 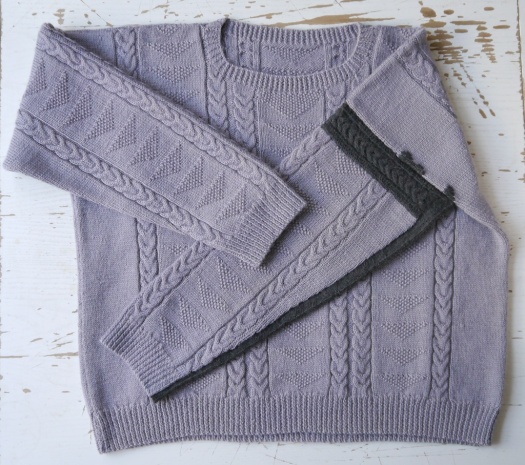 Bernadette can wear her mother’s handiwork again, and be reminded of their one true connection
Both Bernadette and I were very pleased with the end result, so let me end with her own words, providing another little glimpse on the value of this jumper:

It really does mean a lot that I still have the jumper.  My mum always tried to make me the jumpers that I chose patterns for.  Unfortunately I had such bad taste back in the 80s that they were mostly horrible, but it wasn’t my Mum’s fault.
When I was older my Mum made my children quite a few little things, but none of the garments have been hardy enough to survive.  There was one pink fair isle twinset she made my daughter that I really hoped to keep but a moth ate holes in it and it made me feel sad to look at it, and I eventually got rid of it.

So this jumper that you are rescuing is the one surviving garment (apart from an astonishing array of teddy trousers and dresses in acrylic!).

It has taken me over a year to complete, but I am now the proud owner of a traditional Cornish Knit-Frock. 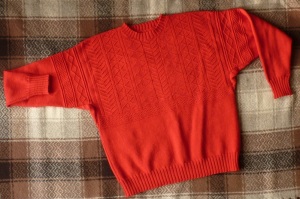 This traditional fisherman’s jumper is also known as a gansey or guernsey. I based my design on a picture I found in Mary Wright’s Cornish Guernseys & Knit-frocks: 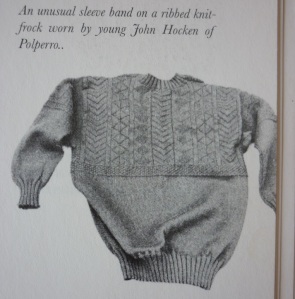 Mary Wright’s book is full of interesting facts and history of the traditional frocks and guernseys and good instructions on how to knit one yourself. I would encourage you to read it. The shape of a knit-frock (this appears to be the Cornish name for a guernsey or gansey), is very simple, which makes for easy knitting, but it also does not distract from the beautiful patterning. The bottom half of the jumper was frequently tucked into (high-waisted) trousers, so they usually have no patterns: it’s less bulky. The exposed part of the sweater is textured for extra warmth.

During the eighteenth and nineteenth century, many women knitted these jumpers inbetween their daily tasks to earn money, while their husbands were away at sea. To make this worthwhile speed was essential. Several things aided in making the knitting quicker: the jumper was mainly constructed in the round and knitted on very long double-pointed needles. They often used a knitting stick, which could be tucked into a waistband. The stick would support the working needle, making for very speedy knitting. You can read more about them on Kate Davies’s blog.

I knitted mine on circular needles, and manage to break two in the process… The cable broke on one pair, and I managed to bend the needles on the other. But, the effort was worthwhile: 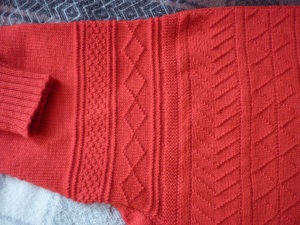 I’m in love with the garter stitch arm strap. It also made for easy picking up stitches for the sleeves. The design feels like a coherent entity: the bars and seeds bands are like opening and closing brackets on the sleeves and chest. And the diamond motif is repeated in three different guises. 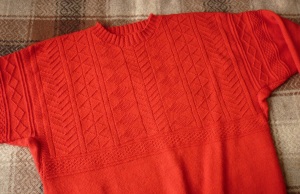 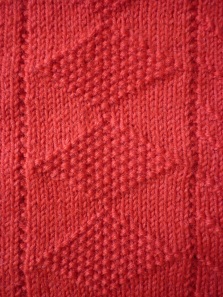 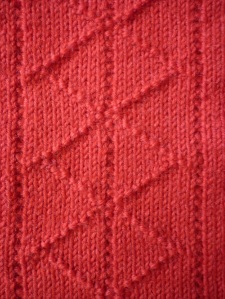 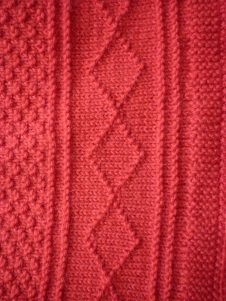 Some things in my knit-frock are not traditional: original knit-frocks were usually black or navy. The body was usually a bit longer and the sleeves shorter. I guess the longer body was to make sure they would stay tucked in. The shorter sleeves would keep them from getting wet and mucky during hard work on a fishing boat.

During the course of knitting this jumper I had to perform some delicate sweater surgery AND I found a new way of keeping track of counting rows. All to be revealed in another post!

PS can I draw your attention to the blanket I used as a background? It’s a Shetland blanket, woven by Crofter knitters in, you guessed it, shetland wool. I found it at Snoopers Paradise in Brighton for a mere £20. 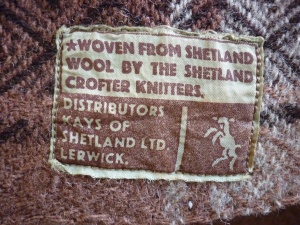 Latest pot adventures! As I’m still very much at the very start of my potters journey, I’m trying out all sorts of things to see what I like. Or not. Here is a variety of shapes and glazing trials. Some more successful than others. Ideas to explore further and others to discard.
My pottery wheel throwing course with amazing teacher Amy @dulse.ceramics at Studio @pottery.gagliano has come to an end. Luckily they have open studio days so I can continue throwing!
My first attempts finally glazed. Really enjoying my wheel throwing workshop at @pottery.gagliano with excellent teacher @dulse.ceramics
Tulips from… @kasteeltuinenarcen Love these over-the-top frilly parrot tulips!
Treasures from @kringloopallerhande. A German salt glaze jug and a pair of hand painted Delftware vases. Both very popular decorative items in the area I grew up and probably The Netherlands in general.
Finally a chance to use this couture technique for applying patch pockets.